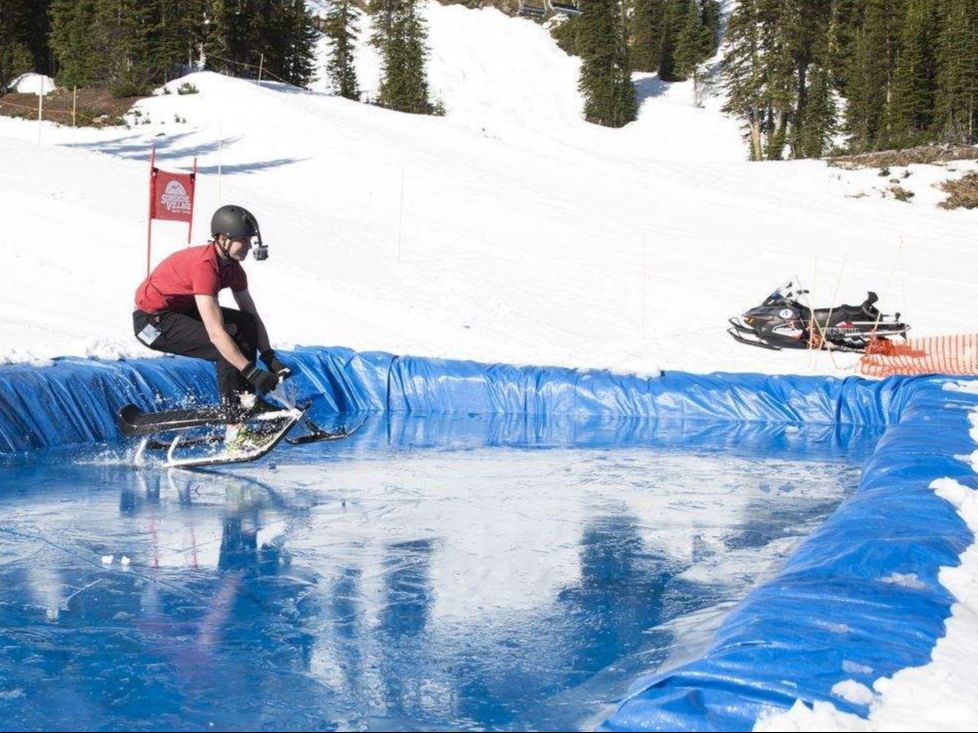 Spoiler alert: this blog reveals the winner of the season

If you were watching the exciting finale last Tuesday night, you probably saw us on your TV Screen!

From the very beginning, we were thrilled by the idea of having Sunshine Village as part of the show. This was the first time the Amazing Race Canada filmed in Banff National Park.

Although, you may recall seeing Banff Sunshine Village in the season finale of the American version of the show back in 2004.

The final leg of this incredible race brought challenges for the three teams left in the competition and for our team. At Sunshine we had to have everything built up and running on time for the shooting- this was the easy part. Our challenge was keeping the secret for a VERY long time.

As you might image, it gets really hard when only a handful of people at the resort knows what’s actually going on. We even had to tell people we were filming a TV commercial not to ruin the surprise!

Now, that the secret is finally out, we can give you some details behind the challenges you saw on the big finale.

The episode was filmed back in May, during Slush Cup weekend. After flying over the Rockies, the teams were sent to Sunshine Village for the second challenge of their final race where they had to complete a two-part roadblock and conquer two extreme winter sports.

In the first part of the roadblock, the teams had to skijor (a mix of skiing and dog sledding) two laps on top of the mountains. Our team had to transport the sled dogs early in the morning before everyone got there. For this challenge, there were some eyebrows raised. "What are we doing with the dogs, and why do we want a cross-country track on the top of Strawberry??"

We had to take some creative liberties with the reasoning. "Oh, Sled Dogs America needs a new training facility...."

Taylor and Courtney the "Super-Siblings" were the first to arrive, and they were earlier than expected. Their early arrival led to us opening Strawberry "For the Car Commercial..." 20 minutes early.

The Mounty siblings arrived about an hour before any of the other teams arrived.

For the second part, the couples had to sled down the mountain across a pond of slushy cold water to the finish line. The executive producers wanted to create a "splash" for this part of the challenge.  Originally, the producers discussed the idea of having the participants compete in our 90th Slush Cup. As we percolated the idea, the idea of having the contestants race down our Watergate Banked Slalom was brewed.

For our team, keeping quiet on the GT Challenge was easier - as everyone just thought it was a pre-Slush Cup event.

For the GT Challenge, we were worried that the GT course would be too slushy and slow for the race. The eve before our "TV" moment we loaded up on fertilizer and spread it all over the course to make sure it was nice and fast, which it certainly was.

For our team, the Amazing Race Canada was the Amazing Sunshine Secret! Our team working on the "course," knew nothing of the event. No one knew, that the Amazing Race would be sliding down the course first thing in the morning on GT Racers; so naturally no one thought to break the fresh layer of ice on the slush pond before Taylor's unforgettable ride down the track.

Taylor, without a doubt, took home the award for the best crash of Slush Cup Long Weekend 2018. If you watched the show, you know the fall we're talking about. Taylor crashed straight into the ice and had an epic face-plant on the snow. He bruised up his face, but the adrenaline of the moment made him jump right up and keep racing like a real hero. Want a replay too?

After racing around 3 countries, 7 provinces and 16 cities, the champions went home with two 2018 Chevrolet Traverse Redline, $250,000 cash, and a once in a lifetime trip for two around the world. The perfect mix for a soon to be married couple.

We hope you enjoyed the show as much as we did. Congrats to Courtney & Adam on their big win. Also, to Taylor & Courtney and Dylan & Kwame for running such an amazing race. You’re all heroes.