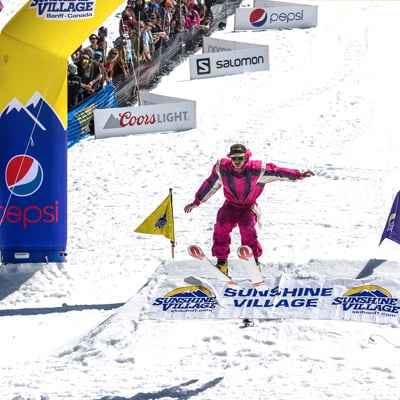 Working together every step of the way.

Welcome to the future of freeskiing and snowboarding. From park and pipe to big mountain, Salomon's progression continues faster than ever. Collaborating with the world’s best athletes allows us to continually evolve and constantly expand what is possible on snow.

Molson Coors Light remains one of Canada's fastest growing beer brands due to its ice cold, easy drinking, Rocky Mountain taste. The Silver Bullet is also a major sponsor of adrenaline sports in Canada, and is proud to support Sunshine Village. The members of the Coors Light Brewing Company hope that you enjoy the season and remind you to "Come for the mountain and stay for the party!"

The Pepsi Bottling Group, or PBG, generates nearly $14 billion in annual sales. It operates in the United States, Canada, Greece, Mexico, Russia, Spain and Turkey, accounting for more than one-half of the Pepsi-Cola beverages sold in North America, and about 40 percent of the Pepsi-Cola system volume worldwide.

ROCKSTAR is the world's most powerful energy drink. Enhanced with the potent herbal blend of Guarana, Ginkgo, Ginseng and Milk Thistle, ROCKSTAR is formulated to provide an incredible energy boost for those who lead active and exhausting lifestyles - from athletes to rock stars.

ROCKSTAR ENERGY DRINK is available at Sunshine Village and are proud sponsors of the Great Divide Terrain Park. Constantly pushing the limits, let us show you what it's like to PARTY LIKE A ROCKSTAR!

Proudly serving our communities has been a long standing Safeway and Sobeys tradition!

We are pleased to provide fresh and healthy food to Canadians from coast to coast, and encourage an active lifestyle through participation in sports including our partnership of the Sunshine Village Free Rider program.

Backcountry Access (BCA) is North America’s leading manufacturer of snow safety equipment, including Tracker transceivers, Float airbags, shovels, probes, and BC Link radios. BCA’s mission is to save lives, not just sell products. BCA has always considered education to be just as important as the gear it makes. That’s why BCA supports avalanche education programs and forecast centers--and why the company backs up all its products with consumer education and knowledgeable customer service.

KIND believes that kindness can change the world. That’s why they're on a mission to make the world a little kinder, one act and one snack at a time.

Sunshine Village supports the development of current and future Olympic, World Cup and world championship athletes through programming and events aimed at producing the best alpine, para-alpine and ski cross athletes in the world. We hope that you will consider support of Alpine Canada, and your important contribution will assist Alpine Canada athletes by making it possible for each of them to achieve their goal of being the best athlete in the world! Sunshine Village and Alpine Canada are committed to getting Canadian youth active and healthy in winter! Your support of Alpine Canada will assist in getting more kids involved in skiing programs this winter. Thank you for your support of ski programming in Canada!

GET AN EDGE ON WINTER!

Book a lesson with a Sunshine Pro.